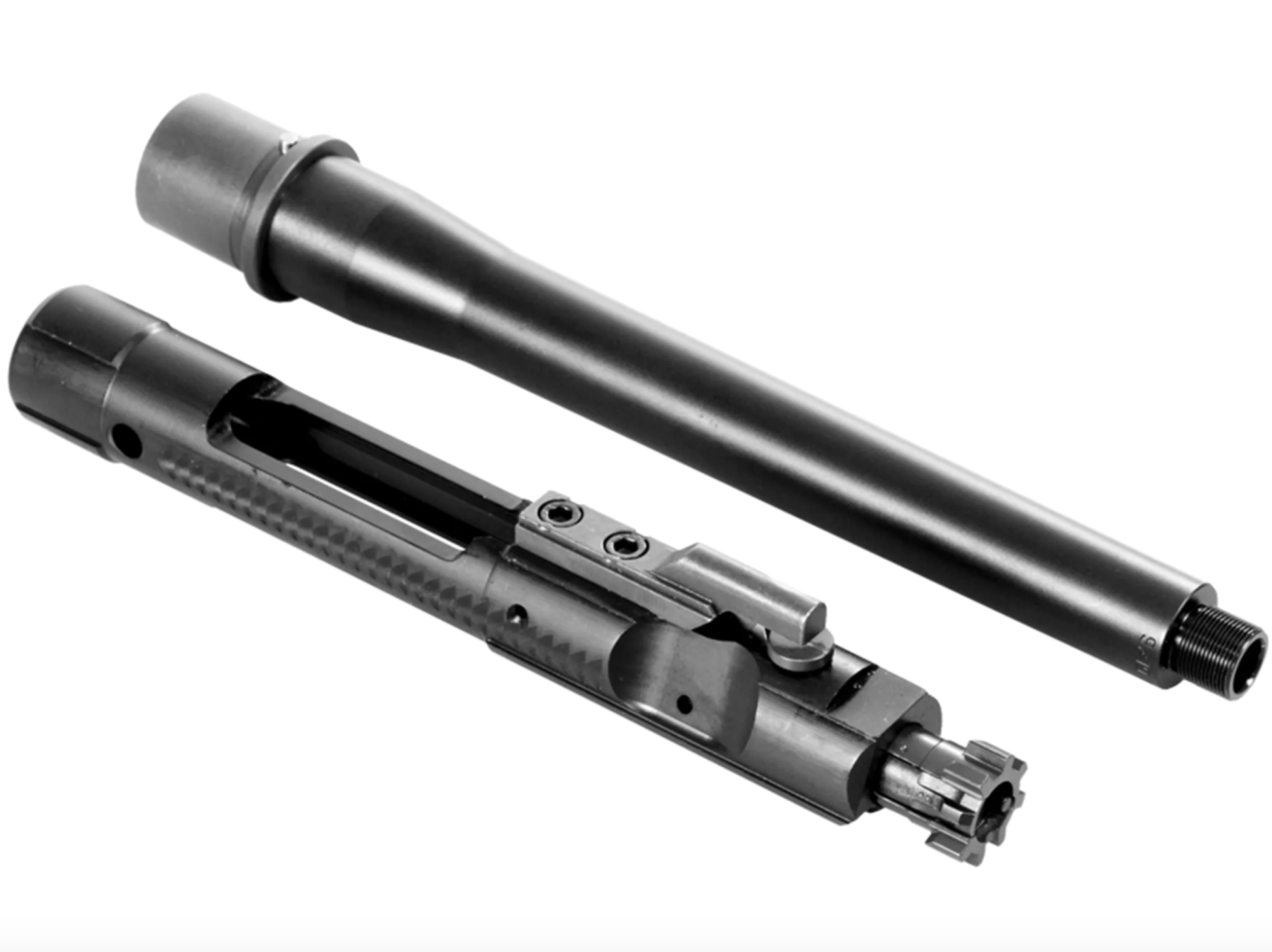 We’re looking at the difference between our patented Radial Delayed Blowback™ operating system, and a traditional or straight blowback system.

Since we released our MkG .45 ACP in April 2017, many videos and magazine articles about our system have been published. They go into detail on the system, but don't always convey the difference between radial delayed and traditional blowback.

First, we'll explain the technical aspects and definitions, and then we'll help simplify it.

What is a traditional blowback?
Traditional blowback is an operating system that obtains momentum from the cartridge case as it’s pushed to the rear. Since there is no locking or engagement between the bolt and barrel, a heavier weight bolt and a lot of reciprocating mass are used to slow down the operation enough for safe operation. The bolt speed, combined with its added weight, results in greater felt recoil for the shooter.

So what is Radial Delayed Blowback?
The simplest answer is it's a patented system we created to eliminate problems with traditional blowback systems found in pistol caliber AR15s.

With radial delayed blowback, the carrier design incorporates a bolt that must be forced to rotate before it will cycle. This rotation slows the action down enough for chamber pressures to drop to safe levels before cycling. The bolt rotation requires enough force that it also negates the need for heavy buffers, bolts, and action springs.

The Radial Delayed Blowback bolt looks like an AR15 bolt, but differs because the lugs are chamfered on the back of the bolt and the cam path is different. The gas key looks like one, but isn't really a gas key. However, like the AR15, it does have a built-in ejector. It uses a standard AR buffer, and you can use an action tuning kit to add weight to the carrier.

The upper itself has a full-size ejection port cover and feed ramps built into the barrel extension, just like you see in an AR15. We've even slightly enlarged the front part of the ejection port to ensure clearance for cartridges like .45 ACP, .40 S&W and – everybody's favorite – 10mm.

Well, the mechanical delay caused by the bolt being forced to rotate reduces the amount of rearward force applied to the carrier.  This allows the use of a lighter BCG, a lighter buffer and still uses a standard action spring.  All of this weight reduction means that there is less reciprocating mass traveling back and forth while the action cycles. Compared to a traditional blowback 9mm, a Radial Delayed Blowback 9mm has almost 6 ounces less reciprocating mass.  That’s almost the equivalent of the weight of a softball!

However, if you decide to run the Radial Delayed Blowback system suppressed, or want to use hotter than average loads, we also offer our Action Tuning Kit which is a series of weights that you can add to the carrier to tune your system to run optimally for your specific setup.

Slower and lighter bolt speeds also mean that you have less wear on your components, and less felt recoil. Less felt recoil means you have faster follow-up shots.

Radial Delayed Blowback is also what makes it possible for CMMG to chamber calibers that are known to be problematic for the AR platform, such as 10mm, 5.7x28mm, .45 ACP and .40 S&W.

After months of scouring the internet for articles and reviews of CMMG®’s patented Radial Delayed...
Read More

Are the CMMG MkG and the Mk10 Platforms Compatible?

In 2017, CMMG® had a tremendous response when the radical new Radial Delayed Blowback™ system was...
Read More
REGISTER FOR UPDATES